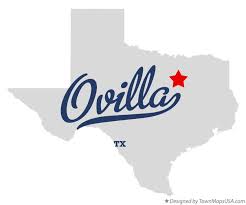 Ovilla is a city in Dallas and Ellis Counties in the U.S. state of Texas. The population was 3,492 at the 2010 census.

Ovilla was a thriving farming community by the 1850s, it remained unnamed. Mrs. M. M. Molloy, wife of Rev. D. G. Molloy, formed the name from the Spanish word villa. Ovilla continued to grow and by the early 1900s had a post office, a bank, a cotton gin, a pharmacy, a blacksmith shop, and several dry-goods stores. Its post office closed in 1906. Fires in 1918 and 1926 destroyed most of the downtown buildings, and this destruction, together with the fact that Ovilla was bypassed by railroads and major highways, led to a decline in growth.

As Dallas grew, however, and people started moving from the city to the suburbs, Ovilla once again began to grow. To escape annexation by DeSoto or any other neighboring city, the town of Ovilla was incorporated in 1963. In the first census after incorporation its population was 339; by 1980 it had risen to 1,067. Its 1984 population was estimated to be nearly 1,300. In 1990 it was 2,027 and the community had extended into Dallas County. The 2000 Census showed a population of 3,405. Today’s population is estimated to be near 4,000.