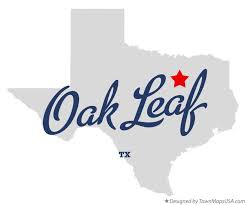 Oak Leaf is a residential community located west of Interstate 35E and U.S. Highway 77 about ten miles north of Waxahachie in northern Ellis County. The town began when approximately 100 members of the Red Oak Creek Homeowners Association decided to incorporate in August 1983. They named their city Oak Leaf to reflect the region’s abundant large oak trees. The community grew in 1987 when residents of the Little Creek and Lark Lane subdivisions petitioned to be included in Oak Leaf. In 1990 the population was 984. Willow Creek Farms, another subdivision, joined Oak Leaf in 1998, and the city annexed an additional eighty-six acres known as Chapman Ranch Estates in 2000. That year Oak Leaf had 1,209 residents. The city encompasses a total of 1,619 acres and includes approximately 400 homes. Oak Leaf has a mayor and city council.