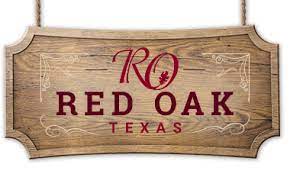 As it is on the verge of explosive suburban growth. Red Oak was one of the exterior locations for filming True Stories, directed by David Byrne of Talking Heads and released in 1986.

One of the first settlers to this area was James E. Patton and his family in 1844. They settled in what is now known as Ovilla, Texas, located about two miles from Red Oak. Before Red Oak was given its name in 1849, it was known as Possum Trot due to the animal that lived there. The Missouri, Kansas and Texas Railroad began near the Red Oak area in 1884 and was completed in 1890. This railroad allowed people to travel to Dallas and Waco. In 1949, Red Oak became an incorporated town of Ellis, County.