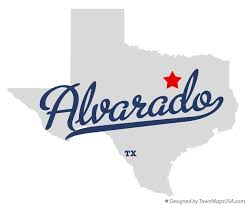 Alvarado is a rural community with an economy that has been primarily agricultural with only a modest retail and industrial base. In recent years the trend has been away from agriculture and toward more urban development. In 2007 Sabre Tubular Structures built a new 200,000-square-foot (19,000 m2) facility located on 147 acres (59 ha) on the eastern side of town. Sabre has over 200 employees at this facility.[10] The city received a 2008 grant of $750,000 from the Texas Department of Agriculture for infrastructure improvements related to Sabre.

In 2008 and 2009 there was an upturn in retail development with the opening of three national chain hotels and two fast food dining establishments. A movie theater/tavern was opened for a short time before closing its door due to poor sales and a general lack of interest.